LA County Public Defender Ricardo García used a magic wand analogy when discussing what he would change in the criminal justice system while speaking with judges and other high-ranking officials from Uganda who met with his attorneys recently to learn from the nation’s largest and oldest public defender’s office.

In Uganda, the government pays only for lawyers for serious offences called Capital offences e.g. murder. In other cases, no such right exists and a person would have to hire a private lawyer or represent him or herself. A group of Public Defender attorneys and Ugandan participants at Pepperdine Law School in Malibu.

The Pepperdine training and exchange included an overview of everything from constitutional principles to misdemeanor and felony assignments to preparing a juvenile case and using a holistic approach.

García said the biggest thing he would make disappear is the institutional racism within the criminal justice system.

“It is a system that was set up to treat the poor and give the poor a protection against the force of government but instead historically it has stigmatized them further and been used to create two systems of justice,” García said. “One for those who have money and one for those who don’t. On the belief, the lie, that people of color and poor people are somehow more dangerous and more violent than white people or wealthy people.” 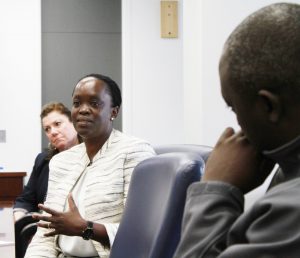 After a two-hour discussion on everything from the unfair bail system and reform efforts to holistic advocacy, García gave the Ugandan officials his personal copy of California Evidence Benchbook (CEB). Known as the “crim law bible,” the book answers every question about criminal law practice in California.

“If you use what we have as a model and learn from our mistakes, you can create something better,” García. “Other countries in Africa, when they look at your criminal justice system, they will come and visit you and you become the model.”