After 23 years as a LA County Deputy Public Defender, Evan Kitahara was sworn in as Commissioner of the LA County Superior Court on Sept. 11 before a packed audience at the Stanley Mosk Civil Courthouse.

“It is with great respect and humility that I stand before all of you here to accept this tremendous honor,” Kitahara said at the enrobing ceremony, surrounded by his wife Stephanie and child. Swearing-in was conducted by the Hon. Sergio C. Tapia II.

“However, I stand before you in this very courtroom on the shoulders of those who have sacrificed much on my behalf to make this day possible.” 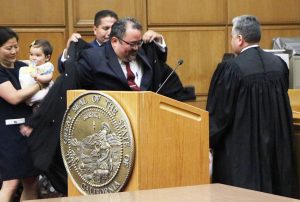 Kitahara spoke proudly of his parents, who were the first to attend college in their families. Both his mother and father’s sides were interned in the Japanese internment camps during World War II.

“The injustices of that experience and these institutionalized family memories that come with it have helped to shape the direction and focus of my own life.”

He remembered as a child the talks he had with his grandfather while helping his grandfather during his gardening jobs in yards. His “Pop” would tell his grandson to “do something with your life. To be the one to make things happen. To be a good person. And to always try to help those around you.”

“It is my heartfelt desire to make good on those promises,” said Kitahara, a former Peace Corps volunteer.

“I remember when I started as a public defender and what I thought I wanted to do. I never thought in my entire career I could be a judge,” García said, adding that a DPD becoming a judge or commissioner was rare years ago. “I’m honored and proud to be able to stand here as a lifelong public defender and see another one of my brother’s being robed today.” Deputy Public Defender Ernesto Diaz, who was the master of ceremonies, noted that Kitahara worked as a social worker in an orphanage for abandoned children.

“One of his primary duties was to find food and medicine and clothes,” Diaz said. “And more than a couple of times when it seemed it was not possible to find the necessities for the kids, Evan came through every single time.”

Deputy-in-Charge Karla Sarabia spoke of his compassion and sympathy and the smallest but memorable acts of kindness he delivered daily. Head Deputy Justine Esack spoke of Kitahara’s calming quality, integrity and humor.

“You can count on Evan to put the fun in fundamental rights,” she said of Kitahara, one of several deputy public defenders who have become judges and commissioners in the past several years.

“Now I don’t just say this to everyone wearing a black robe,” said Esack, who has worked with Kitahara for two decades. “Congratulations, your honor.”