20 Mar Message from the Board of Supervisors 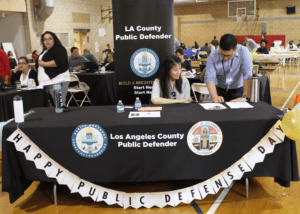 The LA County Board of Supervisors on March 19 celebrated Public Defense Day to honor the 55th anniversary of the U.S. Supreme Court decision, Gideon v. Wainwright.

This landmark decision declared that defendants in criminal cases have the right to counsel, regardless of their ability to pay. It is, therefore, both appropriate and necessary to recognize the approximately 1,400 Los Angeles County staff, including more than 900 lawyers, who work tirelessly in Los Angeles County’s Public Defender and Alternate Public Defender offices.

These individuals are dedicated to defending the liberty interests of their clients as well as advocating for access to the other public services and resources they need to be productive and healthy members of the community.

Los Angeles County has a long history of demonstrated leadership working towards the just and humane treatment of all its residents, regardless of economic status. This has most recently been demonstrated through the Homeless Initiative, Whole Person Care and the offices of Diversion and Re-entry and Immigrant Affairs. In 1913, Los Angeles County established the nation’s first Public Defender position, striking out alone and early in assuring free counsel to those without the ability to pay. This idea was pushed a good seventy years before the Gideon decision by Clara Shortridge Foltz, the first woman lawyer in California, speaking at the Chicago World’s Fair. This action became a model for many other jurisdictions throughout California and across the country. If a jurisdiction of the size, diversity and complexity of Los Angeles County could meet this challenge, surely so could other jurisdictions.

Public defenders are charged with mounting the most rigorous and relentless defense of an indigent client’s rights under the law. No two offices in the nation serve their clients more passionately and aggressively than this County’s Public Defender and Alternate Public Defender.

This Board believes that the Public Defender is also responsible for playing a leadership role in policy issues of a more general nature—bail reform, juvenile justice, Proposition 47 initiatives including sentence reduction, to name a few—and for advising the Board as it determines which of these issues to address and what potential actions to consider. The Public Defender and their staff have a body of experience and expertise, as well as a singular perspective, which the Board respects and takes into account as it shapes and reshapes County policy.

People join the Los Angeles County Offices of Public Defender and Alternate Public Defender because they truly believe in a defendant’s right to a complete and robust defense. The Constitution, Bill of Rights and favorable case law serve as a public defender’s arsenal. To celebrate this day and this critical work, we offer a quote from Justice Black in the Gideon decision:

“[R]eason and reflection require us to recognize that, in our adversary system of criminal justice, any person hauled into court, who is too poor to hire a lawyer, cannot be assured a fair trial unless counsel is provided for him. This seems to us to be an obvious truth.”