During the May 30 conference at the Quiet Cannon in Montebello, panels comprised of a diverse group of County departments and community based-organizations discussed the ways to reduce the risks for homelessness and build stability for those reentering society.

“It is well established that incarceration destabilizes people’s lives as well as the lives of their families and communities,” Solis said. “This is true whether a person is in jail for a few days or prison for multiple years.”

She said the conference was an opportunity for synergism.

“This isn’t all about earthquakes,” she said of the event titled Shaking Up Reentry: A Collaboration Approach to Reentry in LA County. “It’s about shaking up the mind and the heart. And understanding how those two can come together and really make a change.” 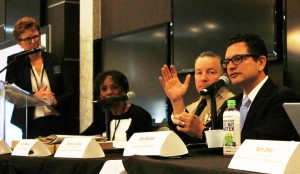 García said that often reentry is considered on the back end; after people have served their sentence in jail or prison.

“That’s a very critical, important part,” García said. “We have record-clearing programs, which help an individual eliminate prior convictions that are significant impediments to jobs, housing and services.”

The Public Defender’s Office also processes Certificates of Rehabilitation, a California court-order declaring that a person previously convicted of a felony is now rehabilitated, he said.

“This is an individual who is looking at a bleak future and our team works at eliminating those obstacles, so that they can go out and get those same things: jobs, education, housing. The things that most of us in this room take for granted.”

But García said reentry must also be considered on the front end; keeping many people from going to jail in the first place by diverting them into treatment programs.

“Partnering with the Office of Diversion and Reentry (ODR), keeping the mentally ill out of custody, placing them in homes and getting them services, from my perspective is not just a start, it’s preventative,” he said.

This goes for juveniles as well as adults, he said.

“Upon arrest, our office and the courts are looking at ways to keep them out of jail,” García said. “We’re finding ways to stop the flow into the jail system by providing the services on the front end.”

During a Justice System and Mental Health panel, Head Deputy Verah Bradford pointed out one such program called Community-Based Restoration. It diverts individuals facing felony or misdemeanor charges who are found incompetent to stand trial into community-based settings to be restored to competency.

“This is pre-conviction,” said Bradford, who oversees the Mental Health Division at the Public Defender’s Office. In the program, an individual may receive housing and treatment without a guilty plea. “The treatment providers will remain with them throughout the criminal process.”

Bradford said the dearth of community treatment centers for the mentally ill has created a crisis.

“So mentally ill individuals whose behavior offends the public or who are a danger to themselves or others are brought into the jail doors,” she said. “Once they’re brought in, there is a complaint issued and criminal charges filed. Even when the behavior is manifestly a result of a mental illness.”

But Bradford said the landscape is changing toward more and more diversion programs.

“Bottom line, don’t arrest people who have mental illness; take them to a community treatment provider,” Bradford said. “That should be our goal and we’ll get there.”